The availability, accessibility and performance of data are vital to business success. Performance tuning and SQL query optimization are tricky, but necessary practices for database professionals. They require looking at various collections of data using extended events, perfmon, execution plans, statistics, and indexes to name a few. Sometimes, application owners ask to increase system resources (CPU and memory) to improve system performance. However, you might not require these additional resources and they can have a cost associated with them. Sometimes, all that’s required is making minor enhancements to change the query behavior.

Usually, developers use the SELECT * statement to read data from a table. It reads all of the column’s available data in the table. Suppose a table [AdventureWorks2019].[HumanResources].[Employee] stores data for 290 employees and you have a requirement to retrieve the following information:

Inefficient query: If you use the SELECT * statement, it returns all the column’s data for all 290 employees. 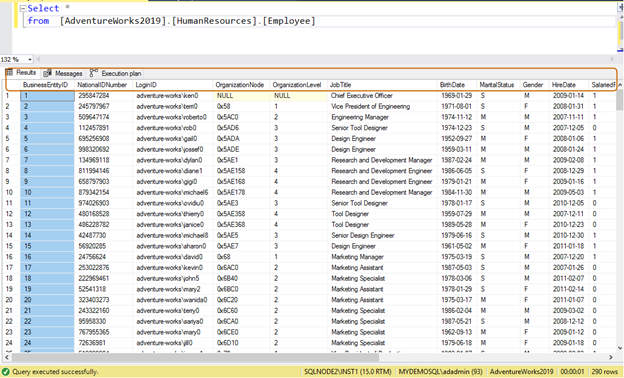 Instead, use specific column names for data retrieval. 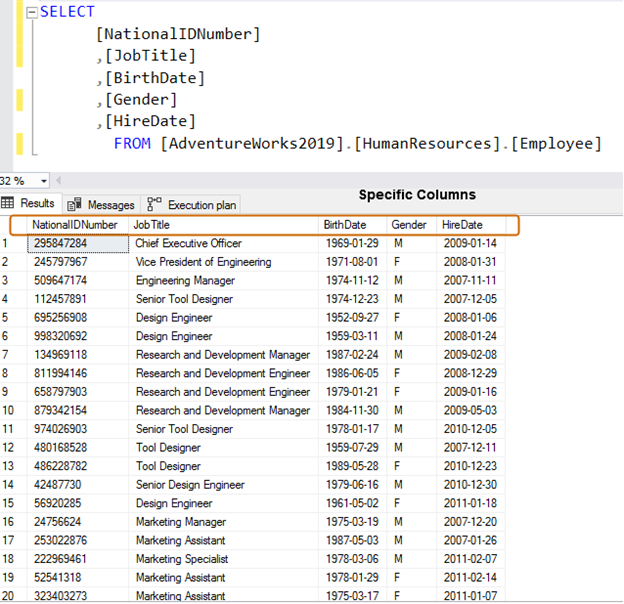 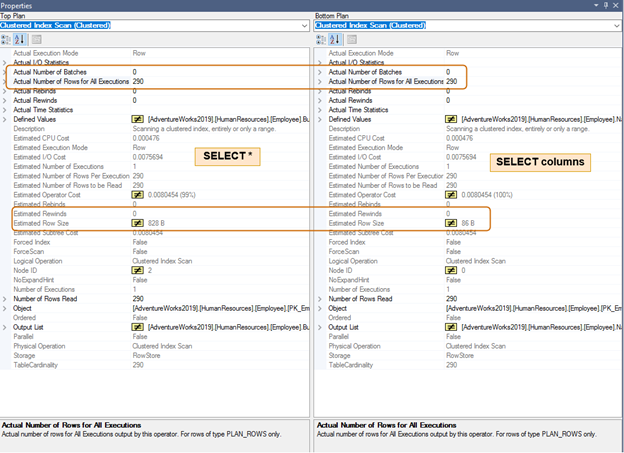 Use of COUNT() vs. EXISTS

Suppose you want to check if a specific record exists in the SQL table. Usually, we use COUNT (*) to check the record, and it returns the number of records in the output.

However, we can use the IF EXISTS() function for this purpose. For the comparison, I enabled the statistics before executing the queries.

The query for COUNT()

The query for IF EXISTS()

Whenever we want unique records from the query, we habitually use the SQL DISTINCT clause. Suppose you joined two tables together, and in the output it returns the duplicate rows. A quick fix is to specify the DISTINCT operator that suppresses the duplicated row.

Let’s look at the simple SELECT statements and compare the execution plans. The only difference between both queries is a DISTINCT operator.

With the DISTINCT operator, the query cost is 77%, while the earlier query (without DISTINCT) has only 23% batch cost. 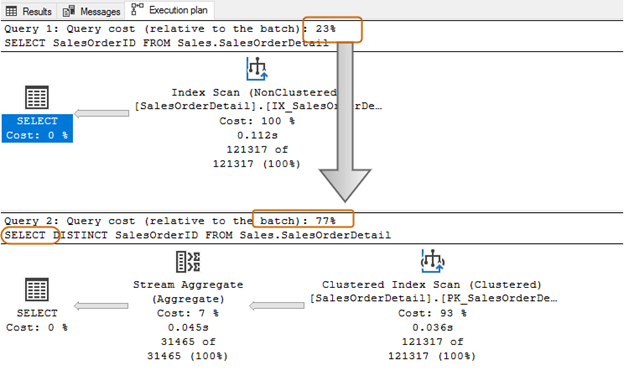 You can use GROUP BY, CTE or a subquery for writing efficient SQL code instead of using DISTINCT for getting distinct values from the result set. Additionally, you can retrieve additional columns for a distinct result set.

Wildcards usage in the SQL query

In the below query, it searches for the string Ken in the first name column. This query retrieves the expected results of Kendra and Kenneth. But, it also provides unexpected results as well, for example, Mackenzie and Nkenge. 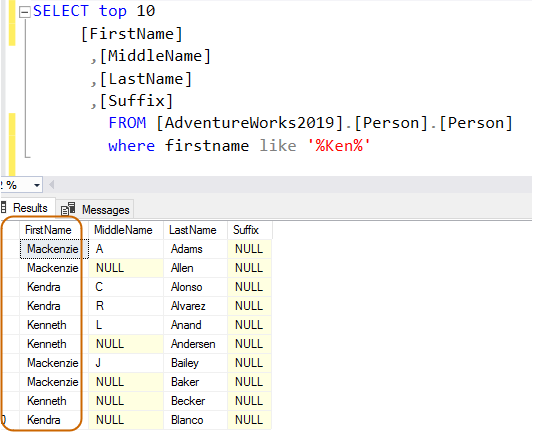 In the execution plan, you see the index scan and the key lookup for the above query.

You can avoid the unexpected result using the wildcard character at the end of the string.

Now, you get the filtered result based on your requirements. 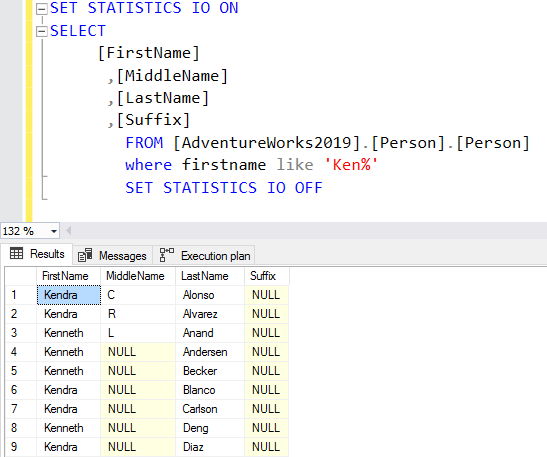 In using the wildcard character at the beginning, the query optimizer might not be able to use the suitable index. As shown in the below screenshot, with a trailing wild character, query optimizer suggests a missing index as well.

Here, you’ll want to evaluate your application requirements. You should try to avoid using a wildcard character in the search strings, as it might force query optimizer to use a table scan. If the table is enormous, it would require higher system resources for IO, CPU and memory, and can cause performance issues for your SQL query.

Use of the WHERE and HAVING clauses

For example, in the below query, we use a data filter in the HAVING clause without a WHERE clause.

The following query filters the data first in the WHERE clause and then uses the HAVING clause for the aggregate data filter.

Usage of the IN and EXISTS clauses

You should avoid using the IN-operator clause for your SQL queries. For example, in the below query, first, we found the product id from the [Production].[TransactionHistory]) table and then looked for the corresponding records in the [Production].[Product] table.

In the below query, we replaced the IN clause with an EXISTS clause.

Now, let’s compare the statistics after executing both queries.

The IN clause uses 504 scans, while the EXISTS clause uses 1 scan for the [Production].[TransactionHistory]) table].

The IN clause query batch costs 74%, whereas the EXISTS clause cost is 24%. Therefore, you should avoid the IN clause especially if the subquery returns a large dataset. 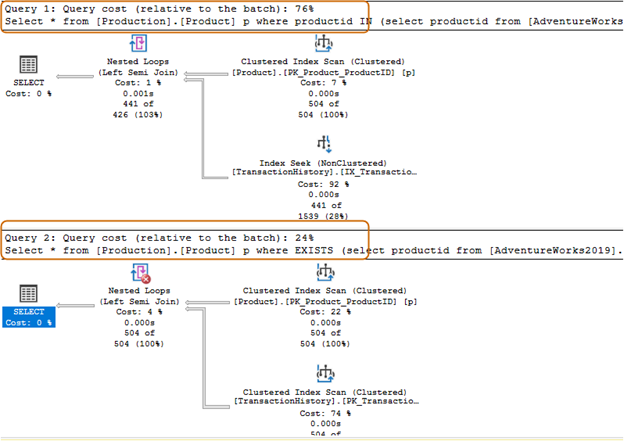 Sometimes, when we execute a SQL query and look for the actual execution plan in SSMS, you get a suggestion about an index that might improve your SQL query.

Alternatively, you can use the dynamic management views to check the details of missing indexes in your environment.

Developers specify the query hints explicitly in their t-SQL statements. These query hints override query optimizer behavior and force it to prepare an execution plan based on your query hint. Frequently used query hints are NOLOCK, Optimize For and Recompile Merge/Hash/Loop. They are short-term fixes for your queries. However, you should work on analyzing your query, indexes, statistics and execution plan for a permanent solution.

As per best practices, you should minimize the usage of any query hint. You want to use the query hints in the SQL query after first understanding the implications of it, and do not use it unnecessarily.

As we discussed, SQL query optimization is an open-ended road. You can apply best practices and small fixes that can greatly improve performance. Consider the following tips for better query development:

SQL query optimization can be the best, and the most challenging part of your job as a database professional. This ebook walks you methodically through five steps in the SQL tuning process. Learn how and what to measure both before and after you’ve made changes so you’re not wasting effort on things that don’t matter. Discover how to find and correct common mistakes that eat into SQL query performance.