Understanding How OneDrive Sync Works and How to Sync Your Files

The origin of the OneDrive sync client began with SkyDrive. SkyDrive had a file syncing feature in 2011 that had limited capabilities. Over the next several years, minor syncing improvements were made. Major syncing features were added recently, such as:

In this article, we’ll review some of the most common questions about how the OneDrive sync feature works.

How do I get my OneDrive to sync?

Yes, OneDrive does automatically sync files, just be sure that the check box option Start OneDrive automatically is selected. OneDrive will then start when you sign into Windows. Syncing will begin when there are folders and files that are not yet synced. There are also OneDrive settings that can automatically pause syncing.

How does the sync function work on OneDrive?

OneDrive is rolling out support for syncing files up to 250GB in size. A few years ago, this would have seemed impossible. However, the OneDrive sync client makes it possible by splitting the huge files into chunks where each piece is encrypted with a unique key. Later, while users edit huge files, the differential sync capability will only sync the changes that are made in their files. Differential syncing shortens the sync time and network utilization. Thus, you should be less concerned about editing large files and waiting for the sync to complete.

A recent update to the OneDrive sync app supports read and write sync for shared libraries that contain required metadata. This will enable business users to edit content in their synced libraries while working from their desktops. With this, now users can sync their OneDrive folders and files and the shared libraries in SharePoint.

What does sync pending mean?

Why does it take so long for OneDrive to sync?

Of course, the time it takes for syncing to complete depends on several factors:

Syncing will run as fast as the available bandwidth allows if no limits are set. Of course, syncing still must compete for bandwidth with other network traffic. 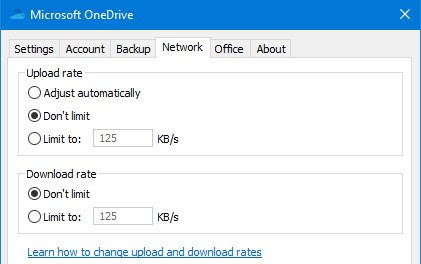 The Adjust automatically setting will force the OneDrive sync client to upload data in the background by only consuming unused bandwidth and not interfering with other applications using the network. Therefore, syncing may take longer; but it will not interfere with other work that is being performed that requires network traffic.

The limit to setting will limit the upload and download throughput to a fixed rate. Thus, the OneDrive sync client will always be syncing; but not exceed an upper limit.

Note: For transferring large files or a large number of files, Microsoft recommends adding the files to the OneDrive desktop app rather than using the Upload button on the OneDrive website.

How do I pause OneDrive syncing temporarily?

There are times when you may need to pause syncing. Perhaps, you want to be cautious when you need to disconnect your computer from a network to move to another location, or you need to reboot. To pause syncing, right-click on the OneDrive cloud icon on the Windows taskbar, click on Pause syncing, then select one of the three times available: 2 hours, 8 hours, and 24 hours. 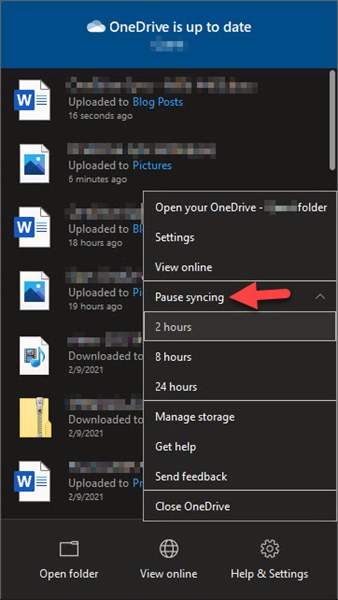 Syncing will resume when the time expires.

Alternatively, you can always resume syncing before the time expires by opening up the OneDrive sync client and clicking to resume syncing.

The OneDrive sync client is almost always syncing. There are several settings that allow for setting limits on upload and download throughput. Differential syncing has greatly improved syncing performance. These changes make it possible to support significantly larger files up to 250GB. You can learn much more about how to use OneDrive and OneDrive file sharing in my earlier posts.