Making sense of Microsoft’s branding. Do you have Office 365 or Microsoft 365? Are they the same or different? How did all this confusion arrive? Here are the answers. 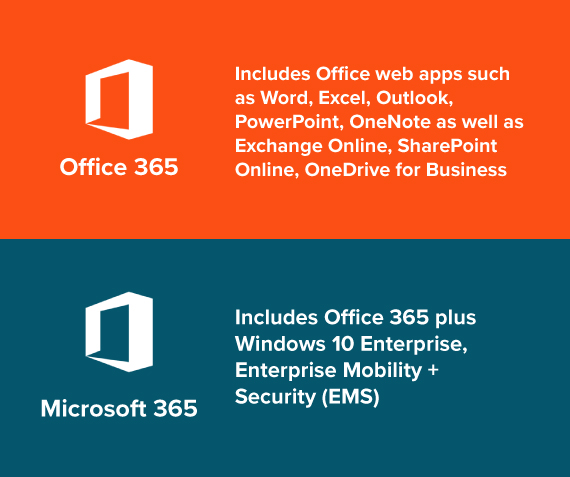 Microsoft launched Office 365 in 2011. It has its roots in two separate earlier products.

The first one might be obvious: Microsoft Office. Introduced in 1988, Office bundled together three core productivity applications: Word, Excel and PowerPoint. Later editions expanded this list to include tools like OneNote, Outlook, Publisher and Access.

Despite its name, however, Office 365 is not simply the Office productivity applications moved to the cloud. Office 365 does offer the Microsoft Office applications using a subscription model, constantly providing users with fixes, updates and new features, including functionality not included in the traditional desktop Office suites. But Office 365 is actually more the successor of Microsoft’s Business Productivity Online Suite (BPOS) — a set of enterprise products delivered as a subscription service hosted by Microsoft as part of its Online Services. Chief among those products were the 2007 versions of Exchange, SharePoint and Lync (which later became Skype for Business). Launched in 2008, BPOS was primarily served smaller businesses.

With Office 365, Microsoft leapt into the software-as-a-service (SaaS) world with a solution built for organizations of all sizes. Indeed, the first release of Office 365 was based on the cloud-centric 2010 versions of the enterprise products in BPOS. For example, in BPOS, SharePoint was little more than a repository for document sharing, while in Office 365, it became a true collaboration tool.

Microsoft updated and enhanced its Office 365 platform dramatically over the years. For example, it ventured into social networking with Yammer; into business intelligence and data mining with Power BI; and into teamwork organization with Planner. In 2017, it launched Microsoft Teams, which has quickly become the collaboration platform of choice for organizations around the globe. It’s really no surprise that by 2017, revenue from Office 365 was exceeding conventional license sales.

Moreover, since the launch of the brand, Microsoft has transformed Microsoft 365 from a simple bundle of products into a coherent and comprehensive cloud productivity platform with not just discrete products but broader functionality like information governance, information protection and compliance. (Certain features require more expensive licensing plans.)

So, why is “Office 365” still around? Mainly because changing large, multi-year plans is difficult, time-consuming and confusing. As a result, there are still enterprise customers with Office 365 E1, E3 and E5 plans, and probably customers with that still have Office 365 G (government), F (front-line) or A (education) plans.

Moving everybody to Microsoft 365 licenses will take time. Updating all the Microsoft documentation will take even longer, and third-party publications might never be revised. As a result, you will still encounter plenty of references to “Office 365” enterprise services — especially Exchange Online, SharePoint Online and OneDrive for Business. More recent platform components and broader functionality, such as Microsoft Teams and Microsoft Information Governance (MIG), are more properly considered part of “Microsoft 365.”

What is Azure Active Directory (AD) and where does it fit in?

Keep in mind that while Azure AD is vital to Microsoft 365, it is by no means limited to Microsoft 365. In particular, Azure AD can provide single sign-on for thousands of other SaaS applications.

View All
On Demand Webcast

How to prepare for the upcoming Microsoft 365 price increase

What You Don't Know About Office 365 and Azure AD