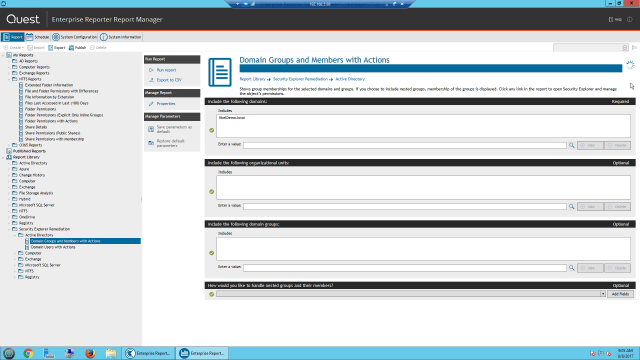 05:00
Learn how to bring complete visibility to permissions, groups and assets with the Enterprise Reporter Suite.
Learn More
Show Transcript Hide Transcript
Hi. My name is Neil Belfour, and I'm one of the Solution Architects at Quest Software. And today, I'm going to demonstrate Enterprise Reporter 3.0. Enterprise Reporter is a discovery-based reporting application. It has the ability to report on multiple platforms. The platforms range from Active Directory to Exchange on-premise to Exchange Online, Computer Discoveries, Microsoft SQL Server, NTFS, which does include NAS devices, file storage analysis, Azure for Active Directory, and also OneDrive are currently supported. The application is discovery-based so it really doesn't require an agent. And since it's discovery-based, you have the ability to discover specifically what you want. And you can customize each discovery to gather just the information that you want from your infrastructure. Once you gather all this information and it is written into the SQL database, you now have the ability to bring up the Recording Console. This is the Recording Console for Enterprise Reporter. The reports can be broken down into multiple categories, such as My Reports. It using Windows authentication. So under the My Reports, you're the only one who's going to see those. There is also the Report Library. And there are currently of little more than 600 reports in the Report Library. And then there are also published reports. So if you customized a report and felt it was beneficial for other people to be able to run that report, you would be able to drop it into the Published Reports folder. All these reports can be edited and customized. You can also see you can organize categories of your own reports, such as I've done here. I've taken Active Directory reports, computer records, Exchange reports, NTFS, and O365 reports and created sub-folders for them. So when I run my reports, I can easily run them from the categories that I do want. New for version 3.0 is additional support for Office 365, which does include OneDrive. It does include hybrid reports, in case you're running in a hybrid infrastructure, and Azure. There is also integration with another application of ours called Security Explorer Remediation, which is new for 3.0. Security Explorer Remediation gives you the ability to remediate some of the results that you do see. For example, if I wanted to run an Active Directory report that included remediation to it, I can easily go in here, run that type of report, and then simply remediate anything that I saw against it. So the same thing would occur if I went directly into Security Explorer and ran one of those reports. If I did the same thing with NTFS, you can easily run any of these reports by simply highlighting a report, and then choose to run the report. Once you run the report, you're going to see all the results that are available. And it's easily exportable to a variety of formats. You can email it from this console just as well. When it comes to remediation reports, the remediation reports are just going to open up another application of ours. So if I wanted to see domain groups and their members, no problem. I would simply add the value for the domain at this point is where I'm running the domain groups against. And when I run the report, as I've done in normal steps, now I would have the ability to remediate inside of these reports. The pinwheel in the upper right corner always shows you a status of how the report is running. Once the report does finish, I would have the ability to remediate the report as well. So any place that you see a URL, you can go in and remediate. So, for example, I'm looking at my administrator's group here. And I wanted to now remediate something within that. I can easily click on that. It's going to open up Security Explorer. And now, we would have the ability to remediate that group within our Management application. And you would see the administrator's group right here. And now I would be able to display the group contents. And now I would see all the users associated with that group. And I would be able to modify them in any way I want. Thank you for your time today. Once again, Enterprise Reporter 3.0, it's available for download from Quest.com. Comes with unlimited tech support and a full 30-day evaluation. Once again, thank you for your time today. 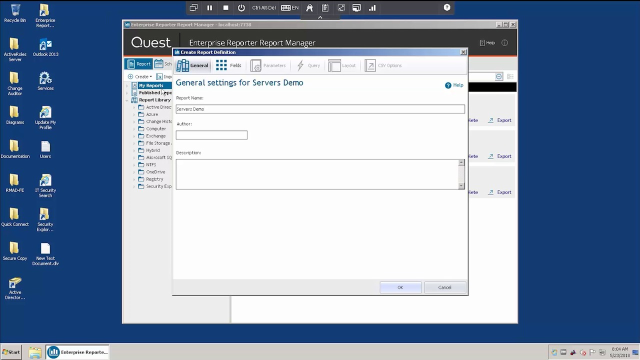 Learn how to use Windows Servers features in Enterprise Reporter. 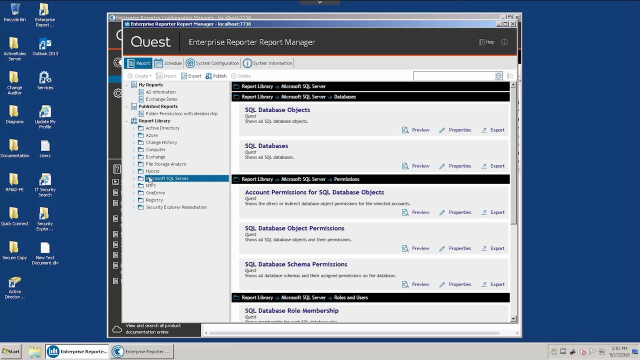 Learn how to use SQL Server features in Enterprise Reporter. 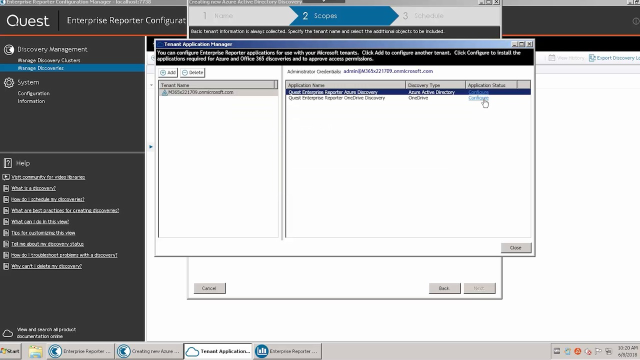 Learn how to utilize Exchange Online and Azure in Enterprise Reporter. 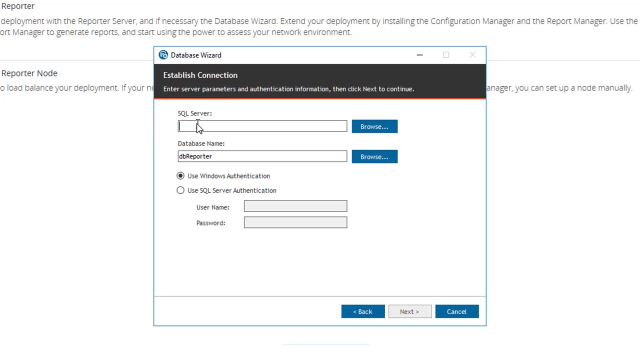 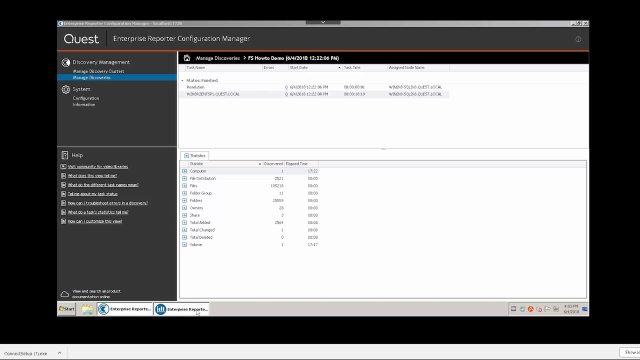 Learn how to use the File Storage Analysis module in Enterprise Reporter. 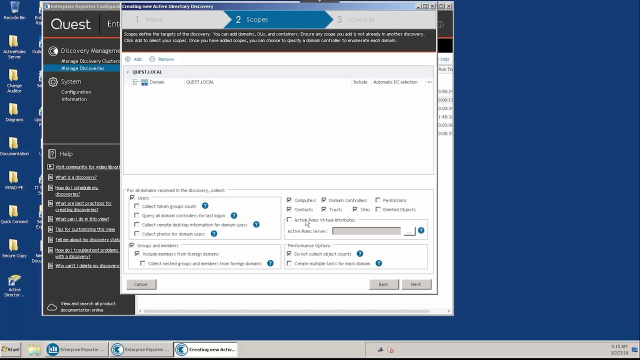 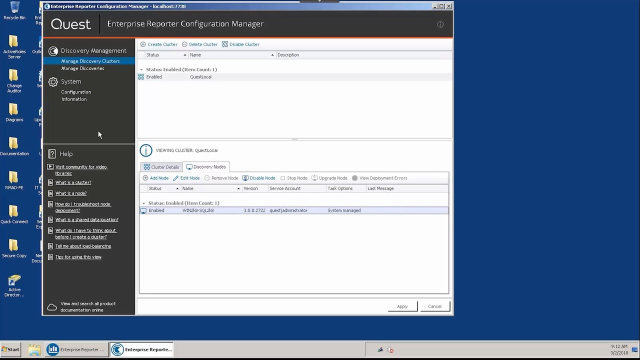 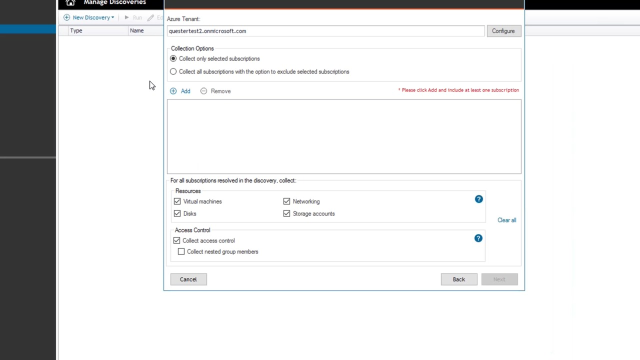 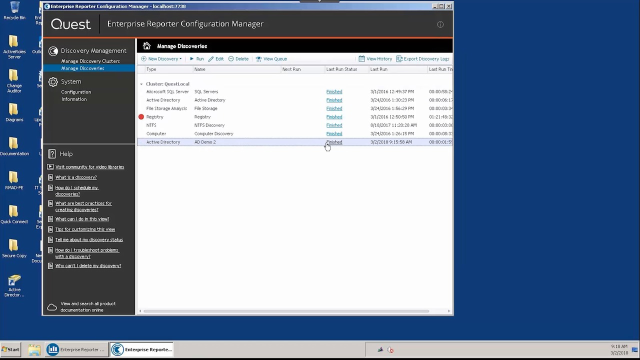 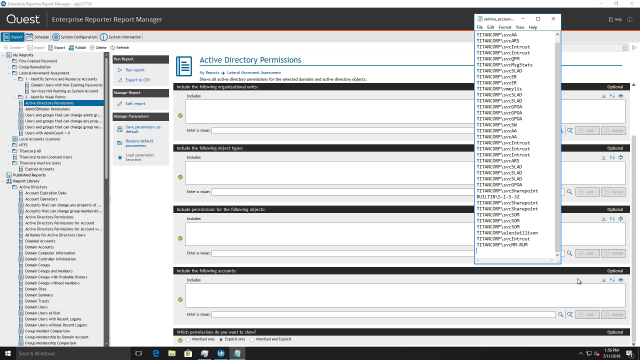 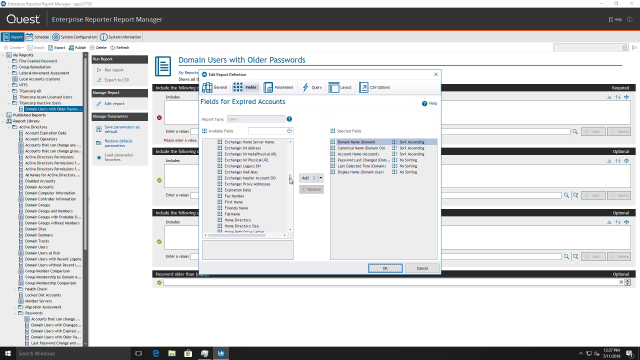 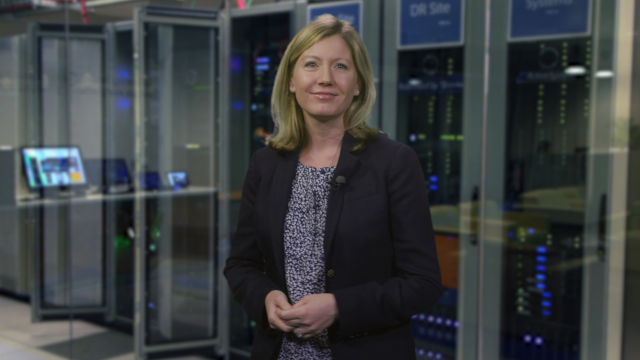