A Horror Story – Upgrading SQL Server to a Newer Version!

Recently, I had a customer call and ask if Quest had any tools that could help with upgrading their SQL Server 2016 instance to SQL Server 2019.  They had already tried to upgrade once but performance was so horrible that they had to revert to their 2016 SQL Server instance - causing even more ‘horror’!

Best practice is to upgrade to the newer version of SQL Server, change the database compatibility level to match the older version for the user databases of interest, then run your workload.  To find problematic queries while running your workload, change the database compatibility level back to the default level of the Instance.  For example, this customer could have upgraded their SQL Server Instance to 2019, changed the compatibility level to 130 (2016) for their user databases.  They could have then run a normal workload for some period, then change the compatibility level to 150 (2019).  At this point, they should have been able to find out which queries degraded by comparing execution plans and response time.  Microsoft’s advice is to use query store for comparison.  The downside of doing this, is that you must turn on query store for every database that your application is hitting which might affect performance. Also, query store doesn’t monitor queries that are run in tempdb or master database.

A better solution for upgrading SQL Server to a newer version is to use Quest Foglight to monitor the entire upgrade process. Let Foglight inform you of any plan changes, degradation in response time, and overall workload health.  You can even use Foglight’s comparison feature to quickly view the entire workload before and after the upgrade to ensure success.

Here is an example of an upgrade from SQL Server 2017 to SQL Server 2019 while using Foglight to monitor and help control the upgrade so we can stop the ‘Horror Story’ from happening.

Foglight can track changes in a SQL Server instance. Some of the changes are automatically monitored.  However, in this case, I manually enter a note that I upgraded the version of the SQL Server instance from 2017 to 2019 and I changed the compatibility level of the test database to 140 (2017).

Foglight has a great comparison feature that allows you to compare different timeframes, baselines, or even different instances.  I’m going to use this feature to identify changes in performance just by reviewing the differences in workloads between the hour that the workload ran under 2017 compatibility, and the hour that it ran under the current version, 2019.  To navigate to the comparison dashboard, choose History > Instance View > Compare.

The comparison screen for the 2 timeframes at the Instance view do not show any significant change in overall workload between the 2 versions. However, this is a bird’s eye view which only shows that the entire workload hasn’t increased or decreased.  You will need to dig deeper into the actual queries, any plan changes, and maybe other dimensions to get the real picture of performance (figure 7).

Further investigation in Foglight shows that the query with the plan change was the most active query in the entire Instance.  By reviewing the timeframe before and after the upgrade, you can get a true picture of how this query will perform going forward. Notice that after the upgrade, there is very little change in response time which looks promising (figure 8). 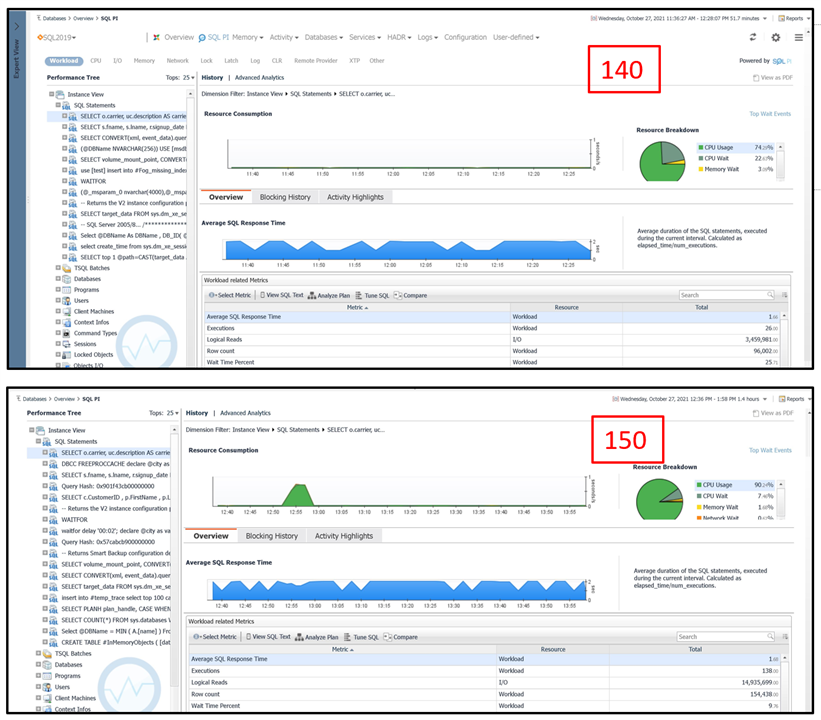 Foglight easily displays the SQL statement and the plan changes. In this case, the plan change made no significant difference in performance (figure 9).

Further analysis of the top queries spending the most time in the database, while utilizing Foglight, should continue until you are satisfied that the new version of SQL Server will perform adequately. By utilizing Foglight’s change tracking and comparison features, you can rest assured that your SQL Server upgrades will be a success!  No horror stories here, folks!