Quest is very excited to announce the General Availability of Spotlight on SQL Server Enterprise  v13.3.

An execution plan contain the steps needed to retrieve the data. It acts like a “GPS” which provides the instructions on how to efficiently get from point a to point b.

When queries are submitted to SQL Server using the SQL language (or T-SQL, the Microsoft SQL Server extension to SQL), the SQL Server query optimizer chooses the most optimal way to run the query, based on many factors..

In version 12.3 (which was GA’d on August 6, 2018), we introduced a major performance diagnostics improvement feature called “Plan Analysis,” which enables the user to easily understand even the most complex execution plans via a graphical representation that highlights bottlenecks, as follows:

In addition, this feature provides recommendations and findings to make tuning simpler than ever before:

In v13.3, we have introduced two major improvements: 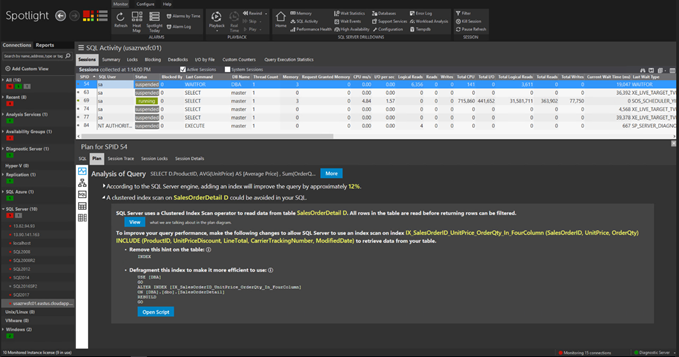 The following is an example of our new “Inefficient Table Scan/Inefficient Clustered Index Scan” rule:

Now with v13.3, we are storing plans in our own playback repository which will allow customers to analyze plans historically. This could be particularly useful when using the “playback mode” in Spotlight on SQL Server Enterprise which enables users to view events and data collected in the past in various dashboards, as follows: 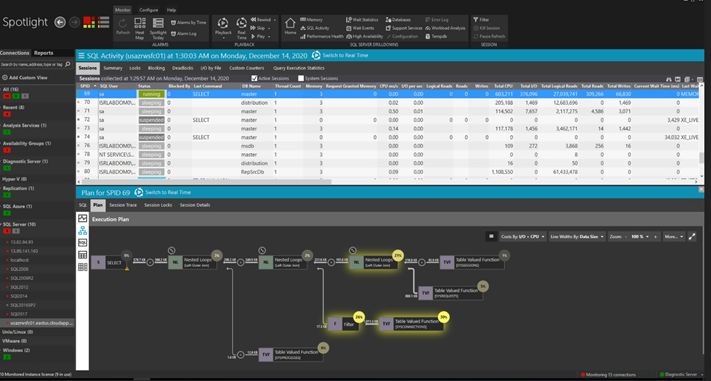 We are happy to announce that with v13.3, Spotlight on SQL Server Enterprise is a fully FIPS-compliant product, as requested by some of our customers.

Spotlight on SQL Server Enterprise v13.3 delivers deeper diagnostics for execution plans, which is key for many database professionals who struggle to understand and tune complex queries in SQL Server.

The product is known for its simplicity, and we are excited that with this new release, we deliver additional improvements that make complex database tuning tasks simpler and more intuitive than ever before.