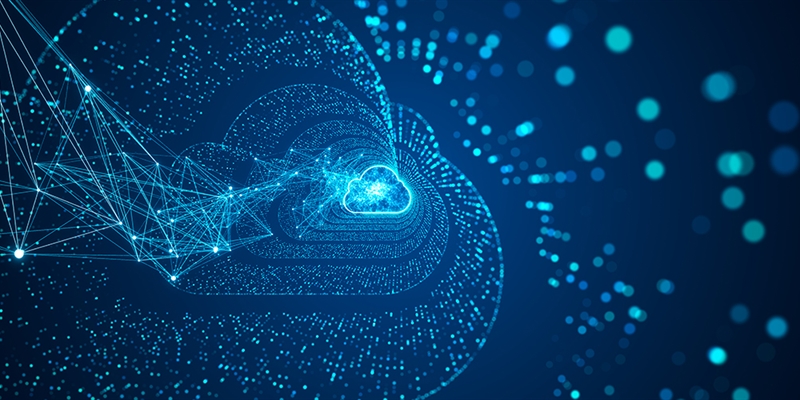 The Quest Foglight Evolve Consolidation Advisor is designed to help those involved with cloud management plan future consolidations of existing environments. Those environments could exist of both virtual machines and physical servers/hosts.

The Consolidation Advisor combines the load of virtual machines and physical hosts (that need to be virtualized) and recommends the hardware needed to run the combined load. The load is defined as the total use of the following resources:

The user defines a set of servers they are able to deploy, and the Consolidation Advisor chooses from the list and recommends how to spread the load evenly if it does not fit on a single server. This aids with efficient cloud management, as well as on-premises hardware consolidation.

It is possible to add existing ESXi hosts to the consolidation list, along with virtual machines that need to be consolidated.

For potential physical hosts, they must be monitored using the existing Foglight Infrastructure Cartridge. With this feature, non-virtual servers can be monitored for the load they will add to the consolidation.

Functional breakdown of the initial release with Foglight 6.0

The Consolidation Advisor, if installed, appears in Foglight as a dashboard and can be found on the left side of both the Expert and Standard views. 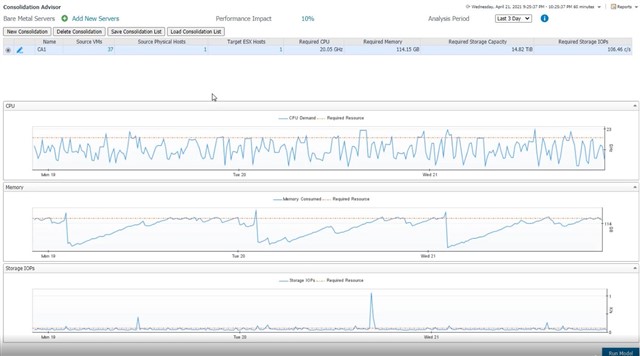 Figure 1: A consolidation model to run. New servers can be added for the consolidation. The “Run Model” button returns the recommended cloud management or on-premises consolidation configuration.

The main dashboard shows the combined load when adding ESX hosts, virtual machines and physical hosts. It also allows users to add potential (new) hardware to be used in a cloud management recommendation.

A user can have multiple consolidation projects defined in parallel. 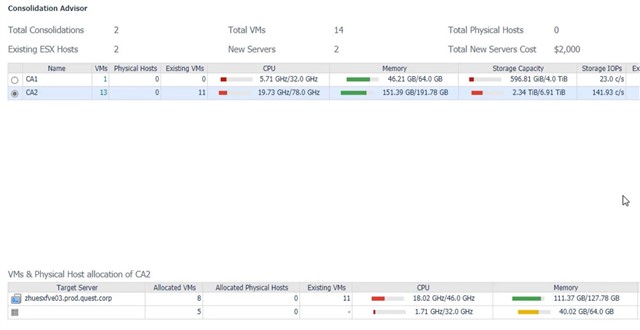 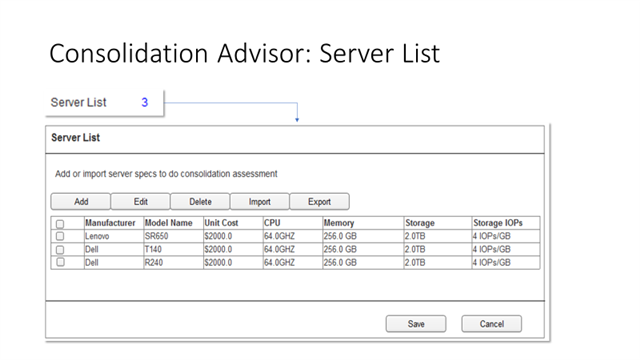 Servers can be added manually or by importing a CSV formatted file. Each server must define the following:

It is up to the user to decide how many permutations of a specific model are added to the list, for example, an SR650 with 128 GB of memory and another with 256 GB of memory. The more entries, the better the cloud management recommendation will be.

The user can allow for a controlled performance impact on the recommended hardware.

Figure 3: Performance Impact can be selected and will affect the destination server recommendation

The higher the percentage, the higher the impact on performance. By choosing a higher impact, a less-expensive server can be selected for the recommendation since the requirements will go down for CPU and memory. If you increase the example above to 30%, those requirements will be less than those shown in the screen capture. If you increase to Performance Impact of 50%, the required resources go down even more.

The Analysis Period is used in the algorithm to calculate the needed resources (CPU, memory etc.) in the consolidated environment. By default, a period of seven days is used, but you can select other values, such as 30, 90, 180 and 360 days.

Figure 4: A desired analysis period can be chosen. The longer the period, the more historical data will be used in the analysis for the consolidation recommendation.

The chosen period must be available in Foglight. If 180 days is chosen, but only three weeks of history is in the Foglight repository, it can only use the three weeks of data for the analysis period.

Adding load to a project

You can add ESX hosts, virtual machines and physical hosts to a cloud management or on-premises consolidation project.

After adding existing ESX hosts, it is possible to add additional VMs not associated with an ESX host.

Figure 5: Selecting and deselecting VMs for a consolidation

Figure 6: The Foglight Infrastructure Cartridge is required for adding physical servers to the consolidation list

After the model has run, a breakdown of the needed hardware for the chosen consolidation project is shown. When more than one server is needed, it is shown on the list of servers.

When existing ESX hosts have been added, the Consolidation Advisor tries to spread the load on those hosts, but if needed, it adds new hardware to the cloud management or on-premises consolidation recommendation when the combined load does not fit the existing hardware.

Removing hardware from the data center is an increasingly common digital transformation as organizations seek to reduce owned hardware and associated fixed costs, such as the hardware itself, networking, storage and people skilled in managing those physical servers. This also includes ESX hosts – eliminate those and a potentially large number of virtual machines must be moved somewhere.

But the decision of what size server (on-premises or cloud) can take the place of a number of existing machines and still provide necessary compute resources is not an easy one. Factors such as growth, peak computing requirements, average impact of the machines on the entire environment and realistic current computing requirements all need to be taken into account. Calculating and assigning the optimal destination machine’s CPU, memory, etc., is a time-consuming and usually very manual process.

Allow Quest Foglight Evolve’s Consolidation Advisor to determine the best destination for a group of to-be-migrated machines for you, saving considerable time and effort and producing intelligent recommendations that will bring you closer to your goal of hardware consolidation and optimal cloud management.