I’m sure you've all heard about this technique at least once before – let me give you a brief architecture diagram. 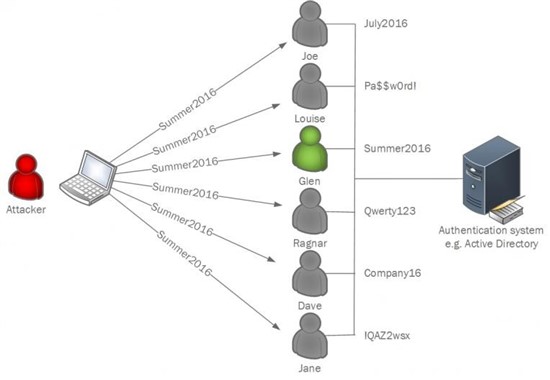 In a nutshell, password-spraying is a type of brute force attack (T1110 by MITRE) that occurs when someone is trying to guess the password by attempting it many times. Of course, nowadays in the Active Directory world, this is not very effective as after a certain number of unsuccessful logins the corresponding account is going to be locked. This is annoying, creates additional work for the Helpdesk team, but efficient enough against such attempts.

This way, a particular user is probed only once in several minutes, which keeps their account unlocked.

Let’s say you have an organization of 50,000 users and most of them are located in Boston. If an adversary knows this, they may have good chances with “Patriots2019”, aren’t they? Let’s be honest – they’ll most likely succeed, because chances are at least couple of users from your 50,000 AD accounts have such a password.

That is why this technique is so powerful and dangerous. 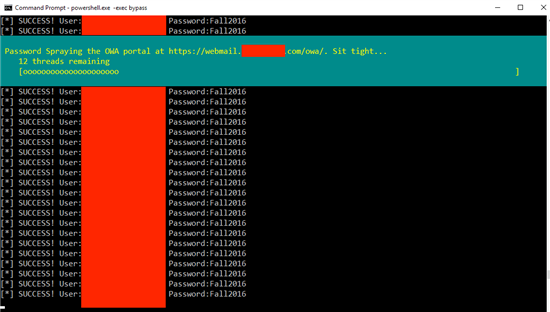 It’s important to note that even if MFA is enabled for such services as web mail, password-spraying still works. This is because adversaries do not need to access the service – they just need to know if the password is correct. See the difference?

Fireeye published a great analysis of APT33 where, among many detailed stages of the attack, they used password-spraying.

After previous unsuccessful attacks, the actor learned the organization’s infrastructure, weak and strong points and about their defense systems, then applied the password spraying technique. Interestingly enough – no one picked-up on password spraying in the environment until the actor started implementing persistence methods.

If you check the attack technique page from MITRE, you’ll see that there is nothing in the Mitigation section about password spraying, because there is no good mitigation besides educating users to use better passwords or using well-known bad password protection solutions.

Although, again, let’s be honest – when your home team wins a trophy, the likelihood that some of your colleagues use their name in the password is not zero.

There are ways to detect password spraying, although it could be difficult, as it’s not a brute force – not the same account is under attack. You could try to monitor all login attempts and their volume, sure – but who can say if it’s an attack or just a spike in login attempts? Also, because it is for different user accounts, it’s hard to draw any direct conclusions.

To help with detection and to reduce noise, we’ve developed a dedicated-password spraying rule in InTrust.

InTrust analyzes 4625 and 4771 as per MITRE recommendation, but we also do additional analysis to reduce the noise.

The rule works when we see multiple account logins (5 by default) from the same computer for many different and valid users, logged within 1 minute. InTrust is also capable of extracting the particular user accounts and displaying them in the alert text. 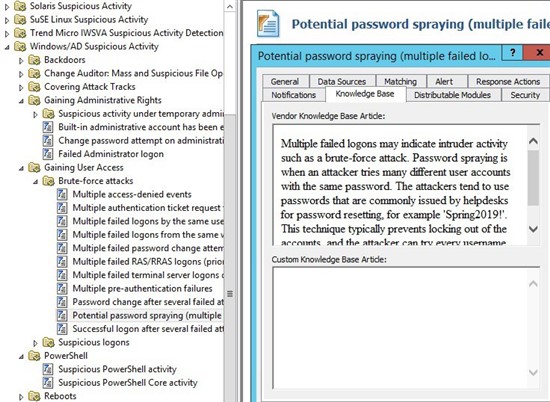