In the field, I'm always asked, "why can't we just use the IP address to sessionize?" Well, this is a bad idea for several reasons. To first understand why, it's important to realize what you sessionizing means. In the state-less HTTP protocol, we have to create states for individual web users so that the back-end servers hosting the sites keep track of who you are, where you've been on their site, and what you are doing. Without saving state, eCommerce would be nearly impossible, since the site would have no recollection of you adding something to your shopping cart on the last page! So, this is typically dealt with using cookies on the browser side, along with a randomly generated code on the application server side. Typical off-the-shelf application servers like Apache JBOSS/Tomcat, IBM Websphere, and Oracle WebLogic might recommending using a variable called JSESSIONID. Developers are free to use whatever they prefer, however.

That said, it's still not clear to many why IP addresses won't work just as well. For instance, on my iPhone I have an external IP address from Verizon that is unique in the world. My IP address is unique to me and me only. Shouldn't that be unique enough to bundle pages together for a replay? Well, yes. And this would work sometimes. In fact, it's the default way that FxM sessionizes until you change it. However, there are many reasons this could become a problem:

Check the picture below and you'll see that several of the grouped IP addresses (4th column from right) are the same but the browser type is different. This validation from FxV is definitely caused by the AOL multiplexing issue. Each line represents an individual user session but with the proper sessionizing it won't matter. 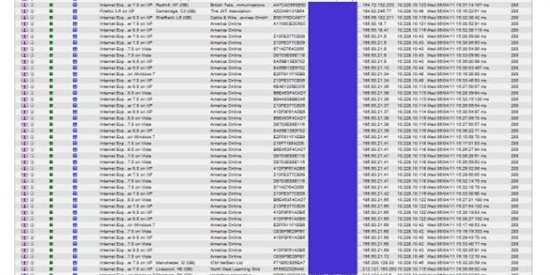